Why are we taking our abortion-vaccine display outside KICC this Sunday? 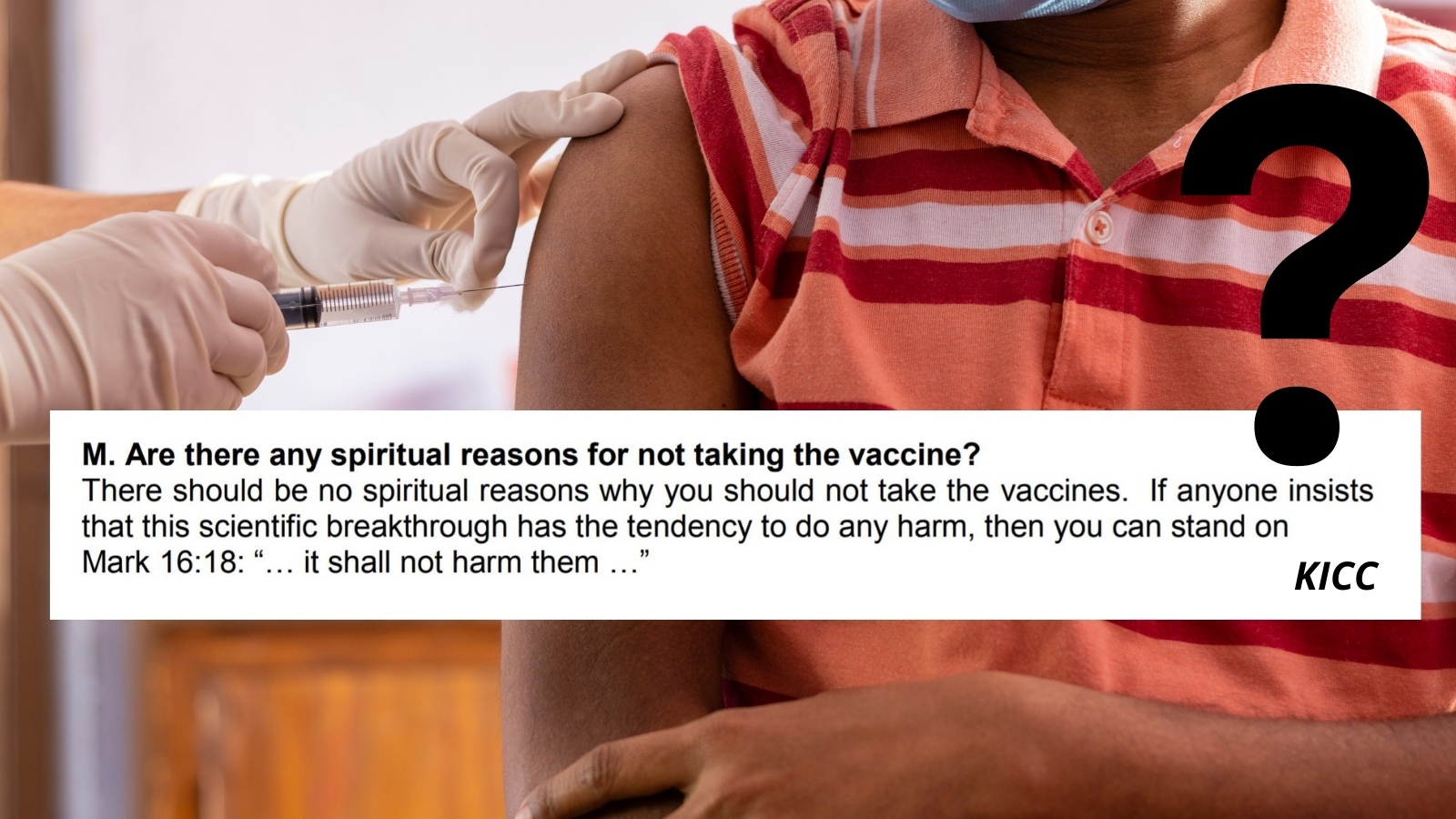 …we have taken the decision to bring a large public education display to educate attendees of your church and anyone else in the vicinity (particularly those seeking vaccination at the pop-up at your church) on…the connection between abortion and the vaccines they are considering receiving. We will be doing this on Sunday 27 June…

This is from an email to the leadership of Kingsway International Christian Centre (KICC) last week: the whole (one-sided) correspondence, which started in early May 2020, can be read at the bottom of this piece, slightly truncated.

Having spent some time in prayer to reconsider, here is why I believe we need still to go ahead:

1) We are not protesting; we are educating

We are seeking to get vitally important information to those considering vaccination, particularly to pro-life Christians.

All the available Covid-19 vaccines in the UK made use of the aborted fetal cell line HEK-293, but this fact is still generally obfuscated by the mainstream media, who give the impression that any abortion connection is a myth or conspiracy theory.

Sadly, KICC have only served to encourage such a view. They say that they are not promoting any particular vaccine or medication, but are simply “providing…accurate and balanced information”. However, neither their press statement nor their extensive FAQ document makes any mention of the ethically significant fact that the vaccines use a cell line derived from the kidney of a wrongly killed baby girl.

A significant result of all this is that pro-life Christians are being led to believe there is no abortion connection with these vaccines, and are thereby being encouraged to take it on a false premise.

I have received much correspondence from people, both friends and strangers, who discovered only after receiving the jab that there was this abortion connection. Why did no-one tell them?

Why should pro-life Christians be left in ignorance as to something many of them will care deeply about? Why should their decision be uninformed?

We simply want to make sure that people are aware of the facts before making a decision. We are merely joining KICC in their stated aim to get “accurate and balanced information” to their people. We are not protesting; we are educating.

The educational intent is clear from the imagery and messaging of the banners we are taking out – there is no mention of the church, no names, no protest language, no imperatives…just information about the vaccine:

2) We are not protesting; we are pleading for help

Babies around the world today are being tortured for their organs.

Those who engage in such practice are emboldened to do so knowing that there is still such widespread acceptance of it and demand for its fruit, including fetal cell lines of the kind these Covid-19 vaccines used.

The fact that even the Roman Catholic Church and pro-lifers in general have acquiesced to vaccines produced out of such practice only serves to embolden baby organ harvesters even more.

We are seeking to be a voice for these voiceless babies, whose plight and suffering are aggravated by the ongoing practice of organ harvesting, normalised and encouraged by the acceptance of these vaccines.

And we are hopeful that pro-life Christians of the kind we are likely to encounter on Sunday will join us in opposing this practice, rather than being swept along in the push for abortion-vaccine uptake.

This is not a protest: it’s a plea for help.

3) We are not judging; we are critiquing

We love KICC. This is not an attack on KICC. We are not suggesting that KICC is in favour of abortion, nor are we suggesting that they are not true brothers or sisters in Christ, or any such thing.

We are not expressing some general assessment or judgment of KICC as a church. God is their judge and ours.

But of course, there is also an implicit challenge in what we are doing. Had they been willing to disclose this information to their people themselves – as indeed was our hope several weeks back and the reason we got in touch with them in the first place – there would be no need for us to do so.

Such an omission could of course have been made in error, but now that we know that they know, and considering that they are de facto promoting the vaccine by hosting a pop-up centre and producing a video to portray the vaccine so positively, and in the absence of almost any “negatives” in documents that are meant to present “balanced information”, one wonders whether this information is now being deliberately withheld so as not to discourage vaccine uptake amongst a pro-life community.

The FAQ document concludes that “there should be no spiritual reasons why you should not take the vaccines”. The omission of any mention of the abortion connection now seems glaring.

It is true that our Lord Jesus said “judge not” (Matthew 7), but just a few verses later he encouraged us to “remove the speck” from our brother’s eye – notwithstanding of course the “plank” in our own – so he could not have been ruling out correction altogether. It seems more reasonable to conclude that whilst we are not to condemn or consider ourselves above others, we are encouraged to make judgments about right and wrong and to help each other to move away from the latter toward the former. This is surely part of what it means to “speak the truth in love” (Ephesians 4:15).

Doing so privately is of course the first port of call (Matthew 18), but when this is resisted and/or when the issue is important enough, public correction (even confrontation, rebuke) is well attested in Scripture: consider the Old Testament Prophets, John the Baptist (e.g. with Herod), Jesus himself (even exposing publicly what people were thinking privately), and the Apostles (think how public the Letters were, and Paul’s confronting of Peter in Galatians 2).

We hold that the abortion-vaccine issue is important enough (because babies are being tortured for their organs), and the omission on KICC’s part glaring enough, that to walk away and drop the whole thing at this stage would be an abdication of our responsibility to get the truth to the people and to challenge an approach that says it is giving accurate and balanced information but is in fact withholding something so significant. We find ourselves unable to simply leave it with the leaders, as we have been counselled to by people we love and respect, to decide whether or not to pass on the information to their people, in the hope that they may come round some time in the future, because by then it will be too late: people are taking sides now with the vaccine and, by implication, with baby organ harvesting.

It is precisely because we believe these people to be concerned about abortion that we believe they ought to know about the abortion connection with the vaccines they are being encouraged to take. We would not bother doing such a thing with a church that wasn’t even pro-life in the first place.

In that sense, perhaps “critique” is the best description of what we are trying to do, rather than a word like “criticism”. We are offering something constructive: Christians that want to stand up for the unborn child will surely appreciate information that will help them to do so more relevantly.

Wouldn’t it be wonderful if KICC, instead of promoting uptake of a vaccine produced out of the fruit of baby organ harvesting, turned around and put its energy into opposing such abominable practices?

And this is not about trying to force a response. It will still be up to them how they respond to all of this, they will have to give their own account.

And we will have to give account for what we did, and did not do, with the knowledge and mandate given us. Under God we believe we must go ahead with this action, because it matters and time is short.

We ask that people understand where we are coming from and what our intention is, but we fully accept that many will not.

Friday 7 May, from us to the leadership of KICC:

…Greetings in the Name of our Lord Jesus Christ…

We write to you on a matter of some importance regarding the Covid-19 vaccines, in view of the fact that you have made your church building available for their roll-out.

Whilst we understand your concern for people's health and have no opposition to vaccines in general, we want to draw to your attention the fact that all the Covid-19 vaccines currently being administered in the UK have been developed in and/or tested on a cell line (HEK-293) derived from the kidney of a baby girl deliberately killed in the Netherlands in the 1970s.

It is quite possible you have heard of something along these lines but believe that it has been "myth-busted" or "fact-checked". What has in fact happened here is that various "strawman" arguments have been used to confuse the issue and throw the baby out with the bathwater. The HEK-293 connection as I have described it above is universally accepted to be true…

You may also have heard arguments that because it was just one abortion many years ago, use of the cell line today does not condone abortion or encourage further organ harvesting from babies. I have dealt with those arguments here, and here in a debate with Prof John Wyatt the President of Christian Medical Fellowship (who confirms the HEK-293 facts as above). The important but often overlooked reality is that organ harvesting from wrongly killed babies - including for new fetal cell lines - continues today, so this is not an historic injustice.

For these reasons we beg you to reconsider lending such wholehearted support to these particular vaccines, promoting them by way of offering up your church building for a vaccination centre. Whilst we appreciate your desire is to care for the health of those around you, the reality is that these vaccines further normalise and encourage the torture of human babies - made in God's image - for their organs to be used as medical resources.

Wednesday 16 June, from us to the leadership of KICC:

…I have now e.mailed you twice and also written you a letter, but not heard anything back.

Just this morning I read about new developments in the atrocities of baby organ harvesting in the States - baby parts being grafted onto animals. If only this were the stuff of sci-fi horror.

We are deeply concerned that the people of God in the UK are still being encouraged to look away from such injustice and to receive vaccines created out of such abominable practices: rather than standing up to expose and end it.

Not having heard back from you at all, we have taken the decision to bring a large public education display to educate attendees of your church and anyone else in the vicinity (particularly those seeking vaccination at the pop-up at your church) on the realities of abortion and the connection between abortion and the vaccines they are considering receiving. We will be doing this on Sunday 27 June…

Let me assure you our display will be legal, peaceful, respectful. We have a long history of doing this kind of public work in the streets and have a warm relationship with the police who understand and support our work.

You can find out more about our work at cbruk.org.

Do let me know if you have any questions or would like to speak.