CBR’s embryo and fetus pictures are derived from many smaller images “stitched” together in much the same manner NASA uses to combine satellite photo “tiles” to form a large “mosaic.” 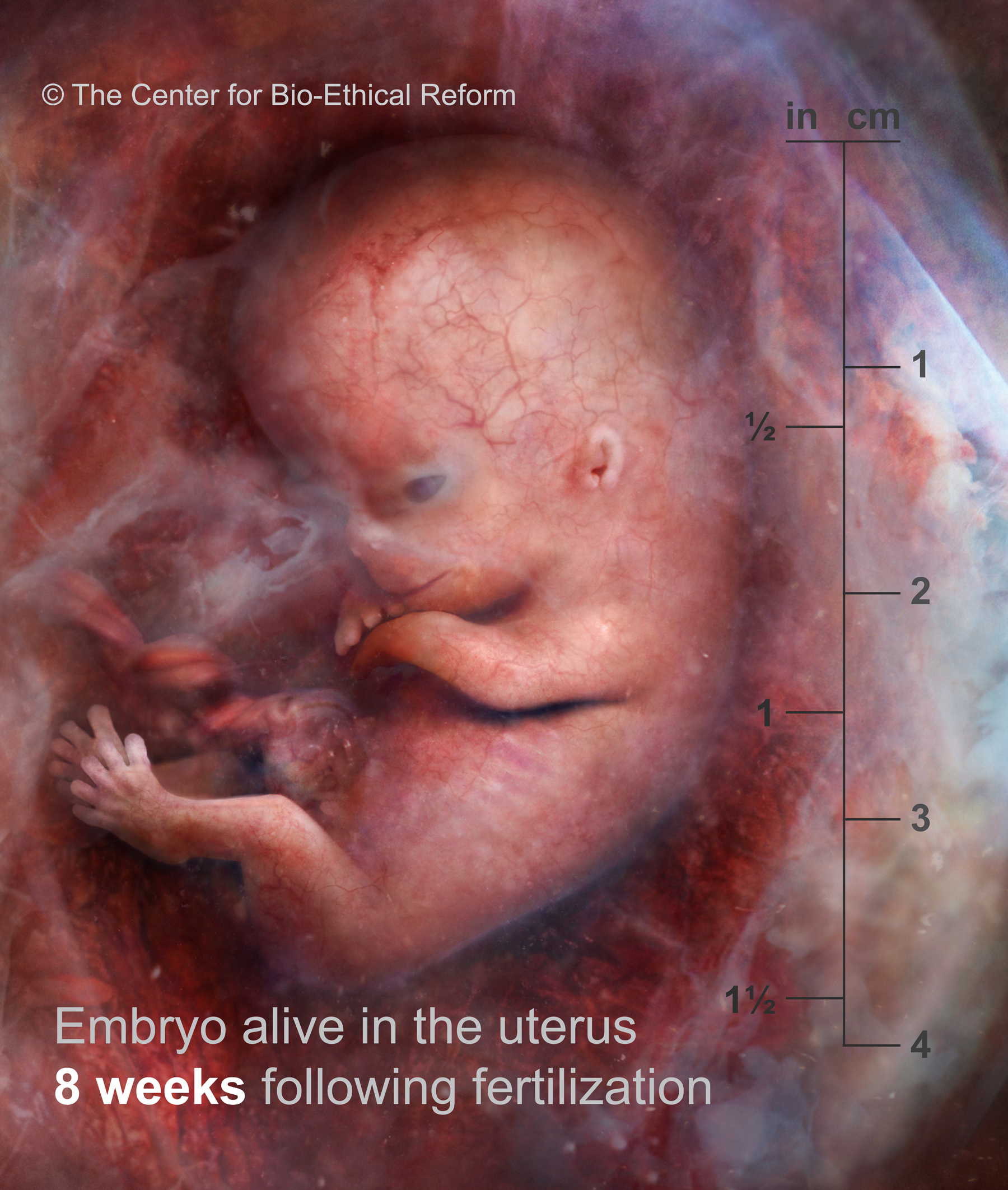 The Center for Bio-Ethical Reform’s (CBR) human embryo and fetus imagery was initially derived by teams of physician researchers and clinicians employing endoscopy (and its subsets, embryoscopy and fetoscopy) to diagnose and treat prenatal disorders in utero. Endoscopes are medical imaging devices which permit the minimally invasive, high resolution observation of tissues inside the human body. At the distal end of these instruments is an objective lens designed for imaging. At the proximal end is an eyepiece, or sensor, which enables viewing.

These scopes generally consist of a tube which encloses a relay lens system (in rigid endoscopes) or a fiber bundle (for fiber-optic, or flexible, endoscopes) for illumination and to transmit an image from the objective lens inside the body to the proximal end outside.

Said differently, endoscopes use optical elements to direct light to the area sought to be illuminated and transmit the resulting image to the eye or detector. Rigid endoscopes generally offer superior resolution or magnification.  But an endoscope’s objective lens is only approximately 1/5 of an inch in diameter, and this relatively small size substantially narrows the observer’s field of view (even with the addition of supplemental lenses such as “negative” or “prism” optics, etc.)

This limitation is further compounded by the need to use the scope in very confined spaces, with only short distances separating the objective lens from the anatomical structures being imaged. As a consequence, only a small segment of the embryo or fetus is observable at any point along the timeline of the scan. An endoscope’s construction must also accommodate frequently conflicting design considerations.  The resulting compromises can involve not only fields of view, but depths of field (meaning thickness of the plane of focus) and image illumination and magnification, as well as distortion issues (i.e., stretched or compressed perspective), etc.

Work-Arounds to the Constraints of Endoscopes

So to depict a high quality, single image of the entire embryo or fetus, large numbers of smaller, more detailed pictures must be joined together in a manner suggestive of the process by which puzzle pieces are assembled to form a completed picture.

This technique employs a complex proprietary process which combines segmental scans to create a final composite image.  The resulting picture is digitally adjusted to preserve each segment’s original colour, resolution, contrast, illumination, etc. Technicians also correct for vignetting (image degradation or loss at the periphery of the frame).

Our process resembles the image enhancement process described in the British medical journal Lancet which recently published a prenatal magnetic resonance imaging (MRI) study involving the creation of 3D pictures to diagnose and treat congenital heart problems afflicting fetuses still in the uterus. The BBC reports that “A series of 2D pictures of the heart are taken from different angles using an MRI machine” to image the fetus.

The story explains that “Sophisticated computer software pieces the images together, adjusts for the beating of the heart and builds … [a] 3D image of the heart.” A paediatric cardiologist describes the resulting 3D images as “beautiful.”

This MRI research is part of a fetal diagnostic project which is also exploring scans using “four ultrasound probes at the same time – current scans use one – to get a more detailed picture.” This process produces a more wholistic composite image.

CBR’s imaging process is also conceptually similar to the technologies used by the National Atmospheric and Space Administration (NASA) to produce wide-area satellite images of the earth’s surface. Until the launch of the Deep Space Climate Observatory Satellite (DSCOVR), which now orbits one million miles from the surface, NASA had no camera positioned sufficiently far from earth to capture the entire globe in a single photograph. As previously noted, an endoscope’s objective lens must also operate too near to an embryo or fetus to permit its whole anatomy to be imaged in a single frame. This is the same constraint which complicates the capture of satellite imagery. Previous pictures of the earth could, therefore, only be created using digital stitching technology to make one large composite image from smaller segments.  Scientists sometimes describe this final image (or “data set”) as a “mosaic,” comprised of many individual “tiles.”

A satellite picture can also be augmented by aerial photography (cameras on aircraft platforms) to improve image resolution.  Hybrid images of this sort can be created by superimposing black-and-white imagery (for still higher resolution) over colour pictures of the same area, the latter to optimise chromic (colour) fidelity.

The scientific press, for instance, reports that the Landsat Image Mosaic of Antarctica (LIMA) “combined over one thousand precise, calibrated satellite images with other data from the continent’s surface to create a single picture of the entire continent.” The high magnification factor (think telephoto lenses which enlarge image features) of each of these puzzle pieces yielded a composite picture depicting more detail than would have been visible in a single photo shot with a wide-angle lens.

NASA uses this mosaicking process to image celestial bodies of nearly every description. The Juno spacecraft made composite images of Jupiter; InSight of Mars; Cassini of Saturn; and Hubble of the Sombrero Galaxy.

So an exquisite depiction of a challenging subject, whether prohibitively small or large, near or far, may involve vastly more complexity than meets the eye of the casual observer.