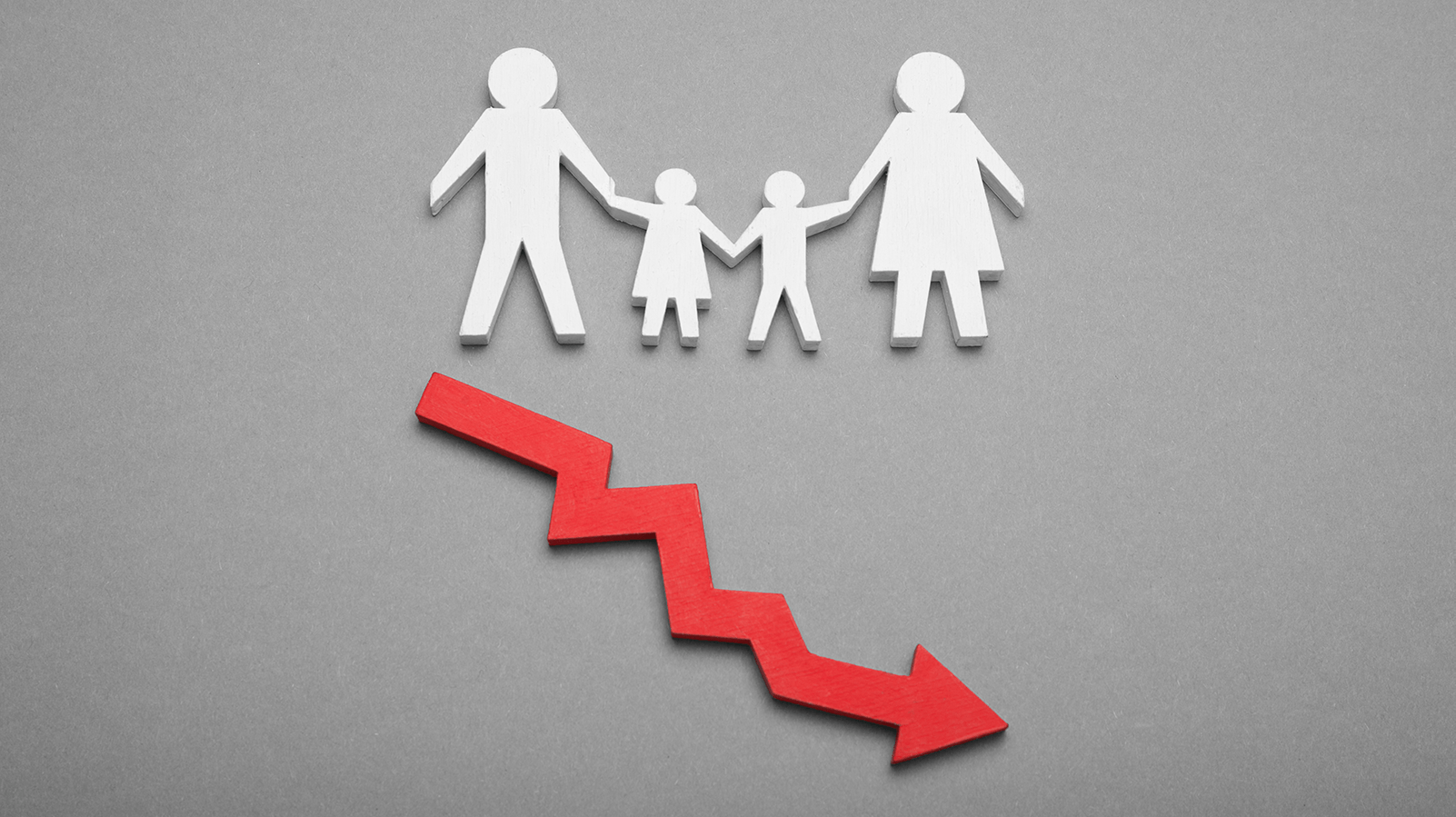 At the start of lockdown some experts speculated that the enforced quarantining of the healthy may lead to a boom in covid babies, however, a year later the opposite has occurred with experts warning of record lows in birth rates during this period. It would appear hesitation rather than copulation has won the day.

This article examines why this is such a big deal and what it has to do with abortion.

Birth rates during the pandemic

Data collected on fertility plans right at the start of lockdown gave us some indication as to how things were going to pan out. A survey of couples from five European countries showed widespread hesitation among couples planning on having a baby, with over 50% of responders in Germany, France and the UK deciding to postpone their decision until after 2020, and with 37% of Italian respondents ditching the idea altogether.

Interestingly, the abstract from the study noted that: “In the UK, fertility plans have been most frequently abandoned by individuals who expect the worst impact of the crisis on their future income”.  While Italians may be the most dramatic of our European neighbours, the Brits are the most pessimistic!

Another study conducted on Google searches during lockdown in the US, examined the number of times pregnancy related words (eg ClearBlue, Morning Sickness, pregnancy etc) were typed into the search bar during the pandemic, and predicted a drop in births by 15%. To validate these claims it cautiously compares these results to similar drops in birth rates following the Spanish Flu pandemic of 1918-1919, the Great Depression of 1929-1933, and the financial crisis of 2008-2009, where it fell by 13%, 15.2%, and 9.3% respectively.

One final economic research piece conducted by The Bookings Institute in Washington DC, examining the same historic examples cited above, gives a more conservative figure. It predicted that covid will lead to a drop in US births by 300,000 to 500,000 this year, a fall of between 8-13%.

In and of itself, this news, though interesting, is both predictable and not hugely significant. Birth rates are known to fall during pandemics and economic downturns, but they soon pick back up again as the economy recovers and the future becomes easier to predict.

What is concerning, however, is how this news meshes with existing trends in birth rates around the world.

Global figures show that population rates are in decline globally.

According to the figures, beautifully collated on the world in data (a fabulous website if you have never visited it before), the average number of children a woman had in 1950, around the world, was five. In 2020, it is now 2.4. Zoom in on Western European countries only, and an even starker picture emerges. Across Europe the average number of births has fallen starkly over the last century:

The UN originally estimated world population would peak in 2050 and then decline, but according to one HSBC economic expert, James Pomeroy, this could happen 10 years earlier than expected.

HSBC isn’t the only acronym to be concerned about this.

According to the BBC, 23 populations, including Spain and Japan, are set to see their populations halved by 2100. In some areas of China, I was informed recently by a friend, their replacement level has reduced in some areas to lows of 0.98 children per family.

Yet far from being aghast, such news was heralded with delight by commenters on the BBC website, with one comment stating:

“Hooray, maybe, just maybe, by then there'll still be a little bit of natural world and  species diversity for the planet to recover as we start to reduce”. 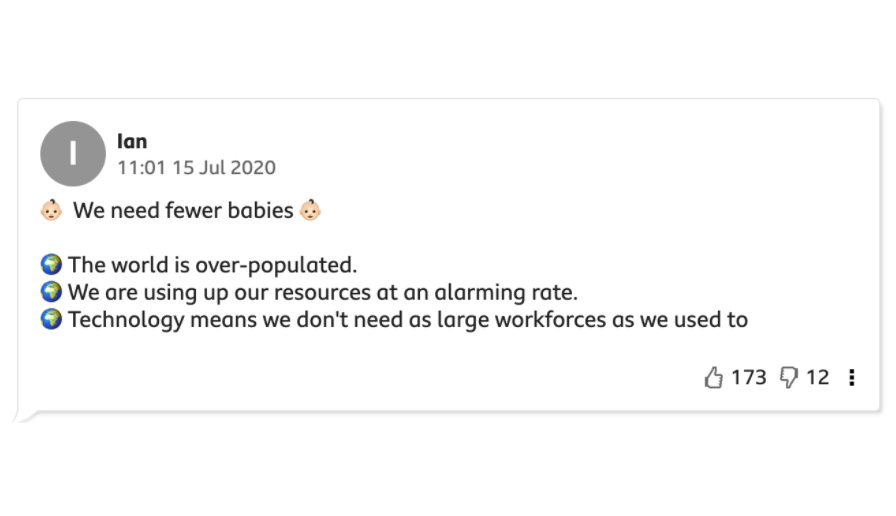 Yet what these commentators don't take seriously, is what happens when a population can no longer replace itself.

The internationally accepted replacement ratio is 2.1 kids per couple. This figure accounts for the replacement of the parental unit - 2 for 2, with a 0.1 concession for the small number of children who won’t make it to adulthood, won’t have kids themselves or, finally, fulfil a mother’s nightmare by emigrating to rural Tazmania with their girlfriend, never to appear on Government records again.

Few people realise, but most of the developed world has been cruising blissfully below this replacement ration for a number of years. The UK has been doing so consistently since 1927.

*The UK re-established its replacement ratio twice after 1927, reaching peaks of 2.7 children per family during the post WWII period and again reaching a high of 2.8 kids per family in 1963, however, since 1972 it has dipped and remained below the replacement ratio. Its last recorded ratio was 1.81.

The impact of this hasn’t been noticeable on the economy because many European countries have replaced their workforces by means of imigration, often from cultures who rear larger families.

However, with a global decline in birth rates affecting these “sending” countries also, the developed world cannot rely on an endless supply of immigrant workers to plug the hole, and may one day have to look the issue in the face.

Talking to the BBC, Population Research Professor Christoper Murry stated that failing to replace a population, or bolster the number with immigrants, leads to what is known as an “inverted age structure”.

According to Murry this creates “enormous social change” and “uniformly negative consequences”. For example, the number of people over  80 years old will soar from 141 million in 2017 to 866 million in 2100.

"It makes me worried because I have an eight-year-old daughter and I wonder what the world will be like….Who pays tax in a massively aged world? Who pays for healthcare for the elderly? Who looks after the elderly? Will people still be able to retire from work?”

If Murry is right then our societies are currently inching towards long dark chapters of untold stress, financial pressures and suffering that will affect not just the human race but the natural world too.

The situation Murry describes, far from creating an idyllic human free paradise, will leave behind Everest sized dumps of used nappies, rubber gloves, soiled mattresses and failed robotic creations that leach into the ecosystem because no one has the manpower to recycle them.

It will be like scenes in the film WALL-E, but with more bodies.

What does all of this have to do with abortion?

Well returning to the fabulous World in Data website I mentioned earlier, the four main reasons they give for the decline in birth rates are as follows:

What this list cunningly skips over is the role abortion plays in all four of these factors.

Elsewhere on the same website it notes that of the 85 million ’unwanted’  pregnancies in 2012 50% ended in abortion (verses 13% miscarriage and 38% for unplanned births). That is 42.5 million abortions! A July 2020 fact sheet produced by the Guttmacher Institute, estimates the current figure at 72 million unwanted babies killed per year.

For while an increase in female labour market participation and a decrease in child mortality are to be welcomed and celebrated, the paradigm is totally inverted when abortion is called by its proper name.

A BBC survey of elite sportswomen published in August last year, makes this point well. Of the 537 women surveyed, 22 confessed to having had an abortion. One respondent named Lucy justified the decision like this:

"You just couldn't do what I went on to do. The risks are high in my sport. You're either in or out. It only really worked for me when I didn't have any responsibilities to anyone else. I don't regret it at all”.

Another top female rugby player, who already had one baby, decided to intentionally kill her second child through fear that a C-section scar might “erupt as a result of repeatedly crouching in the scrum”, she explained "I didn't want to give up my sport.”

While it is appropriate to be aware of the stresses involved in top level sport, women holding down jobs at the expense of their own babies' lives is not something modern societies should be proud of nor promote. Nor are these cases extreme. This mentality is clearly visible in more static vocations, with abortion figures of women 35 years and above, on a steady rise since 2010.

It also calls into question the so-called victories in child mortality. Factor in the intentional torture and killing of healthy children in the womb, and infant mortality is actually running at a record high.

It is chilling to consider that the latest UK abortion statistics show that in 2020, during the UK lockdowns, over 210,860 unborn babies were intentionally killed. Of them over 100,000 were poisoned and ejected entirely at home without any medical supervision. Of these the majority were discarded down the toilet or into domestic waste.

These figures show that the monthly average for live births in 2020 (around 52,000 per month) is 35% lower than the number of human beings who began developing in the womb. Not due to spontaneous death by miscarrige but by abortion. It is no surprise therefore that a recent book on the subject has been entitled Mission Millions.

There is no denying that the world population is increasing, and that such a fact will place additional strain on resources. Nor am I contesting the need for new advances in thinking and technology to safeguard a peaceful future on our glorious planet.

What I am contesting is whether ending innocent human life, be it in its early weeks or at any point, should be seen as an “appropriate”  technology for securing such a future. My argument is that it cannot be. Not simply because it is decimating a gigantic community of individuals who may grow up to possess the solutions we need, but more so for the precedent it sets. Novel and peaceful solutions can never be properly formed or tested by a country, nor a church, so long as ‘killing’  is still on the table as a viable option.

At school we learn to inwardly scorn the brutality of the ancient world for leaving their disabled children on the hillside to be consumed by the elements or worse. Yet, even these nations never sought to destroy their healthy, in the way we now do by means of abortion. Even the unwanted could at least become slaves to fuel the state machine.

We appear to share no such vision for our “unwanted” children, choosing instead to poison them within their mother's wombs, rather than dare to believe that the future hope of humanity is found among the “unwanted” communities of the earth.

A shot to the foot may leave the person with a limp. A shot to the womb, on the other hand, leaves a nation without a future.