Meet the heroes on the frontline: Jane, Liverpool team leader

All around the UK we have teams of brave and dedicated individuals regularly going out in their cities to challenge public opinion on abortion. These heroes have been willing to step up and expose the tragedy of abortion, despite the cost.

We want to acknowledge the important roles of those who make up our teams in this new series of interviews. To begin with, we would love to introduce you to our Liverpool Team Leader, Jane. You may have seen Jane in some of our recent videos courageously remaining calm in the face of obnoxious opposition from abortion supporters.  Read on to hear about the challenges and highlights of her work on the frontline. 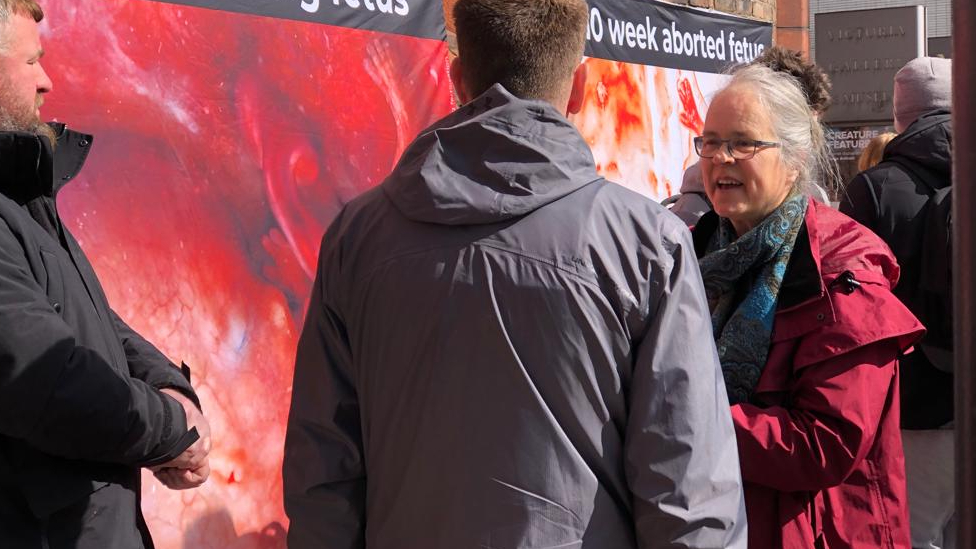 Jane leading a display in Liverpool

How long have you been pro-life, and when did you start to do something about it?

“I have vague memories of taking the Pro-life side in a sixth form debate (1979?!) even when I was an atheist!

Meeting some active Pro-life Christians who started 'Image' near Manchester one of whom had been arrested for standing outside a clinic, gave me my first exposure to this work as a new Christian in the early 80s.

I first started doing something about it after moving to Turkey a few years later. A friend had an abortion and I cried for three days. A few of us started praying regularly together and producing materials in Turkish.”

What influenced you to actively get involved in sharing the reality of abortion with the public?

“When we moved back to Liverpool by 2000. I had hoped to join in with the Pro-life work in the city but couldn't find anything to connect with....Until the spring of 2018 when the [CBR UK] Awakening tour arrived!

As I watched Aisling's presentation and saw the abortion video, I became immediately convinced that using images on the street was the right thing to do.”

What have been some of the biggest challenges?

“I think one of the biggest challenges was early on when I excitedly shared what I was doing with good solid evangelical Christian friends, only to meet with disapproval and opposition.”

Have you seen minds changed on abortion?

“I have seen people shift from pure antagonism to being more agreeable to talk and listen. Others on our team have been much more effective!”

What are your highlights of a display?

“Once we're set up and running, I love looking round and seeing the impact of the display, people stopping to look, the team engaging with members of the public, knowing that others are praying. It's the teamwork.”

What interesting people have you met on a display?

There was a father who wanted a leaflet so that his daughter was educated on Pro-life issues.

A very supportive Muslim doctor once said: "You've made my week! No my month!"

Once a lady stopped to explain her own story from more than 30 years ago: She had just discovered she was expecting twins. The doctor said she should abort the babies, having taken antibiotics for ingrowing toe nails, and that she had one hour to decide! She went to the Cathedral, a nurse supported her and they were born fine....in fact she was just on her way to meet one of those 30 year old twin boys!

What made you decide to step up and lead a team and how did you find the process?

“Susie [Molina] asked me to! I think it was the fact that she seemed to believe that I could do it.

That ignited something in me. It was then a response of faith. I was eager to learn and complete all the assignments, but it was a busy time approaching our daughter's wedding. The practical start up of displays in Liverpool happened through strong support and lots of encouragement from Susie and also Christian. At no point did I feel I was left to get on until I was ready to. One of the hardest things for me was the technical stuff, and Susie was extremely patient and never gave up!”

What makes you think being on the streets with these images is an effective work?

“So many thousands of people see those images in one day, even if they don't stop to talk ,they turn their heads to look, from a glimpse to a prolonged stare.

People remember from last time and say they've seen us before.

Many express their deep feelings and contrary thoughts and opinions.

It provokes dialogue. It exposes the truth that people may not want to know, but this could either be a first step towards healing or pivotal moment in a decision for life or death of a child.

If opposition is any mark of effectiveness then we have plenty of evidence!”

What keeps you going?

“I have a deep conviction that this is what God wants me to do.

Decades ago we were promised 'many children.'  After a long wait and much surrender we were blessed with four. Being involved with CBR UK’s work is a further outworking of God's promise and our inheritance.

I can really say that I experience God's pleasure over me in this work. The doing of it is fulfilling at a deep level.”

What advice would you give to others who are pro-life but are on the fence about getting actively involved?

“Watch the abortion video, then ask yourself,

Can I just stand by and let this happen?

Then ask God what he would have you do about it. And start doing it!”

Are you pro-life? What are you doing about it? Why not start off by joining the movement to begin exposing abortion near you.