Hey Ann Furedi, the Safety of Women is NO Laughing Matter 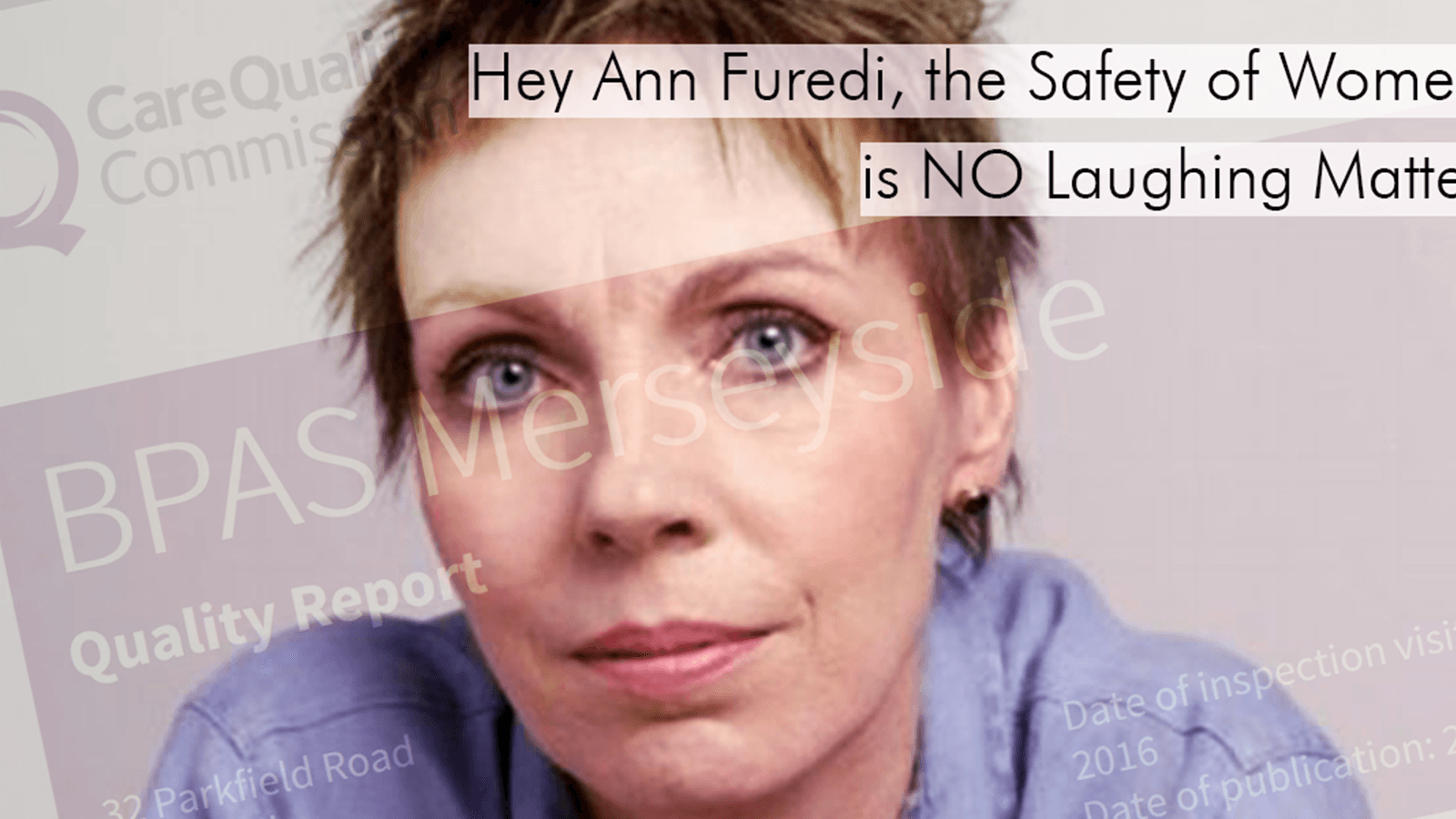 Recently, Bpas have joined the campaign to rescind Ireland's 8th Amendment; a law which protects both mothers and their unborn children from the risks associated with abortion - the death of the child and to the mother's physical and mental health.

Bpas claim to be compassionate and concerned for women's health. They are championing 'Women's Rights' to bodily autonomy.

They want to see abortion legalised in Ireland, as well as campaigning for the deregulation of abortion in the UK through ALL nine months of pregnancy. The unborn's bodily autonomy over his or her right to life does not figure anywhere in their thinking; they are just concerned about their perceived 'rights of women' - and they accuse pro-lifers of only having concern for the child and no interest in the mothers; clearly a fallacy, as the pro-life movement view both mother and child as the human beings they are, with equal rights to life and protection. They will help women in a crisis pregnancy find the help and support they need to care for themselves and their children.

Ann Furedi is the CEO of Bpas and her disdain for all the silly regulations around safe practise in the clinics she is responsible for surfaced in a meeting held in London in June 2015:

"Decriminalisation and demedicalisation: rethinking family planning for the 21st century"

During this meeting, Ann expressed her frustration for what she appeared to consider patronising and unnecessary safety regulations forced upon her with the suggestion that it was as if the regulators just did not trust abortion providers to keep women that come to them safe. Here is what she said in the meeting:

"We not only have the law that regulates abortion services in a particular way that Sally’s outlined, but if you’re an abortion provider not only do you have to comply with ‘the law’ and not only do you have to comply with every other bit of regulation that applies to general acute services provision and you’re inspected by the Care Quality Commission to make sure that you do all of that, but the Care Quality Commission has a special set of TRAPS, [laughter from room] a special set of targeted regulations for abortion provision, that as far as I’m concerned nobody has EVER questioned whether or not these should exist in a particular way, because it’s assumed that we need it. You know it’s just assumed that we need it!

In addition to the law, the Department of Health has its own kind of version of TRAPS*, it has the RSOPs, the Require Standard Operating Procedures that are a special bunch of 28 regulations that I have to sign up to to say that every single one of our clinics will abide by these particular RSOPs before we are allowed to operate. So you think well, why would they do this, what is it in abortion care that makes the Department of Health, and the ministers and what have you think that we actually require this? What detailed and complicated precise stuff is it that these abortion clinics do that require these particular regulations. Well you know I’m not going to go on through all 28 of them, but it did occur to me that 2 of them might be useful as an illustration of this specific and difficult stuff that we have, that I personally have to sign up as the accountable officer to say that we achieve. So RSOP, I think it’s number 14 says: 'providers should ensure that staff performing abortions beyond 9 weeks of gestation should have relevant skills and training' [laughter from room] why would you possibly think that anyone who was providing healthcare would not make sure that their staff had proper skills and training. You know err... RSOP number 20: 'providers should minimise risks in emergencies through a program of regularly checking equipments' well thank god for that (laughter) If it wasn’t for the Department of Health having a specific regulations to an abortion provider to make sure that the equipment was in working order because why would we think that?"

Well clearly, as the damning report on serious failures at the Merseyside Bpas clinic, published on January 26th, 2017 revealed; yes Ann, you really do need all those silly regulations and you are responsible for failing to ensure they were met and women put at risk. Just to pick up on the RSOP number 20 that you highlighted, on checking on equipment to minimise emergencies:

"There was no robust system in place to ensure that resuscitation equipment was regularly checked to keep patients safe. It was not clear whether several pieces of equipment used in theatre had been subject to the appropriate maintenance tests."

The rest of the alarming findings of the CQC can be found in the link further down the page.

It is truly disturbing that Ann Furedi seems to have a cavalier attitude to patient safety and is more concerned that these regulations are petty and an impediment to getting on with the job:

"In addition to the law, the Department of Health has its own kind of version of TRAPS, it has the RSOPs, the Required Standard Operating Procedures that are a special bunch of 28 regulations that I have to sign up to, to say that every single one of our clinics will abide by these particular RSOPs before we are allowed to operate."

Returning to Bpas or Ann Furedi's campaign to see abortion legalised in Ireland, let's look at how Bpas, Marie Stopes and National Unplanned Pregnancy Advisory Service 'care for women' who cross the Irish Sea to avail themselves of their services.  The majority of women travelling from Ireland for abortions head for Manchester; the next most popular destination is Liverpool. London comes third, with far fewer heading there.

Marie Stopes appear to be the main provider of abortions here. Marie Stopes International was found to be seriously failing women in the UK in the latest CQC inspection published in Dec 2016.

"The concerns identified by the quality regulator from these inspections led to Marie Stopes International suspending specific types of termination between 19 August and 7 October 2016, while it worked with CQC to address these concerns.

The CQC findings showed failings in the area of hygiene practice which of course puts women at risk of infection during procedures: On page 5 of the report:

Bpas are the main private provider of abortions in Liverpool, and the most recent CQC report raises deep concerns, listing 16 serious failures.

From the CQC report on Bpas - British Pregnancy Advisory Service:

"In March 2016, CQC were contacted by the local NHS trust who raised concerns regarding the frequency and scope of patients coming into them from BPAS Merseyside..."

Are Irish women travelling to England for 'safe' abortions really safe?  Is abortion really health care at all? Presently, pregnant women are well protected by the 8th Amendment, and contrary to popular belief, doctors will always provide whatever health care a woman needs during her pregnancy, even if on rare occasions, her baby is lost in the process of her medical care - this never necessitates an abortion, which is not a life-saving treatment, it just kills her baby.  Ireland is recognised by the WHO as providing excellent care to pregnant women with complicated health needs.  Stay safe and protect the 8th Amendment.

Below are links to peer reviewed studies that will help those considering an abortion (or those encouraging others in a crisis pregnancy situation towards an abortion) to be fully informed of the potential health risks for the mother.

Also, studies here on the risk of premature births in future pregnancies in women who have had abortions.