We would love to introduce you to Alec who is an Educator on our West Midlands Public Education Team. We call our team members Educators as they are educating on both the humanity of children in the womb and the reality of abortion. On displays, they use the images and engage the public in conversation to do this. They are out there being the literal voice for the unborn. Alec is extremely loyal to our work and has not missed a display in his city since it started in December 2021.

Read on to find out more about Alec and what he has to say on his role as an Educator. 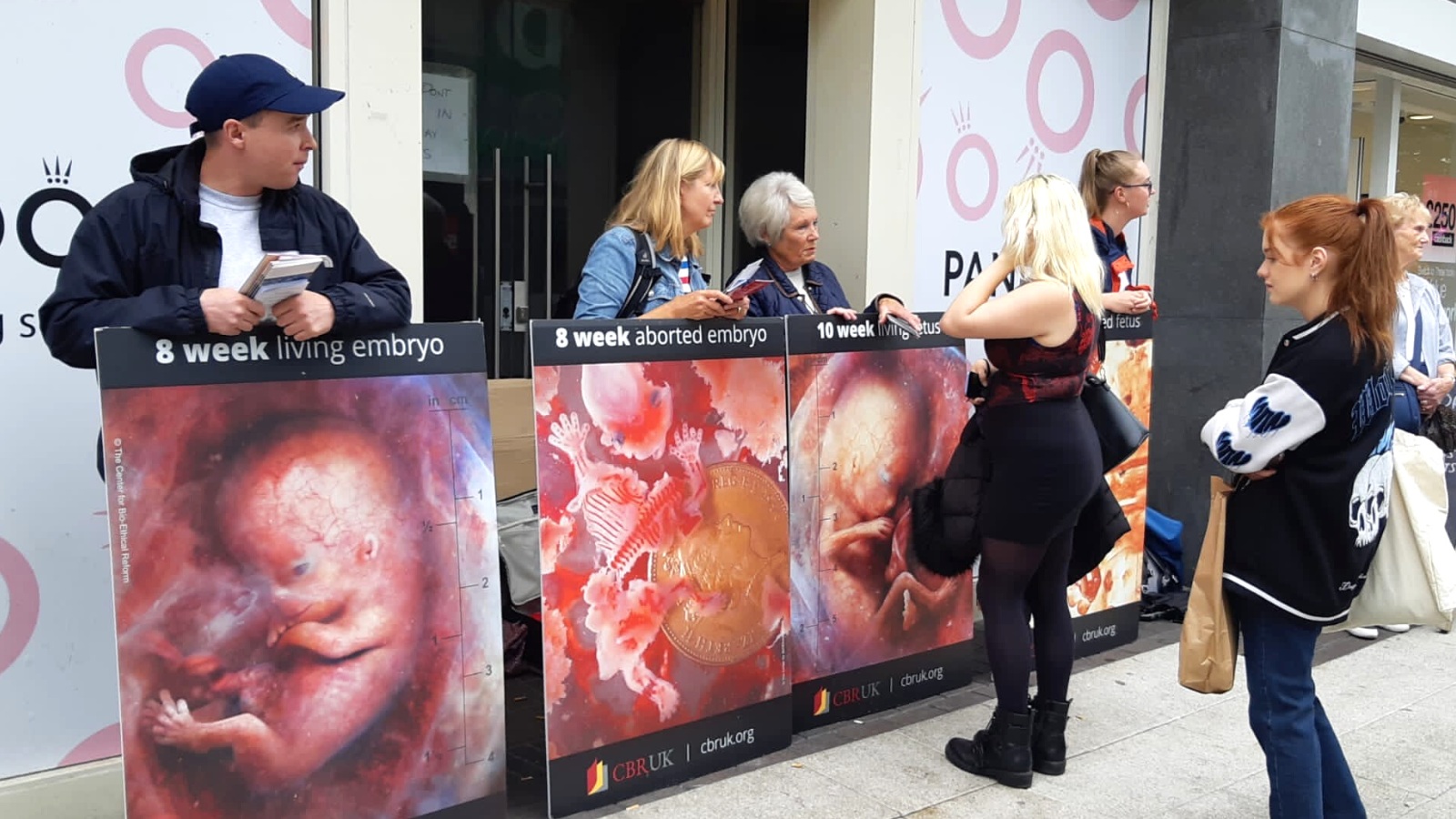 Alec (left) on a display in Birmingham

Alec works full time for a Christian charity based in his city, which focuses on supporting the homeless at the same time as spreading the good news of Jesus. He became a Christian at the beginning of 2020, and says that, “since encountering Jesus, it has changed my life and my world view.”

Alec has not always been pro-life. He remembers being told at school that the unborn were a ‘clump of cells’ and therefore he accepted this position and never looked into what abortion really is. Then things started to change. He explains:

“When I became a Christian and started to read the bible, I noticed that God loved us before we were in the womb, so he must love us when we are in the womb.”

He then knew abortion was wrong, but he was not fully aware of how bad the situation really was. Then one day, one of our speakers, Debbie Mountford, did a presentation where Alec works. Alec was shocked to hear about the reality of abortion and the related statistics. He then hosted a training session and display team in the building where he works. From this training he was inspired to get involved and has since not missed an opportunity to go out in his city.

While this work can be encouraging, it also has its challenges. For Alec, the most challenging part of his role as educator is seeing how aggressive pro-abortion individuals can be whilst being ignorant on the subject. He says:

“I could see they were just repeating what their favourite celebrity or pro-choice school teachers had told them without looking at any pro-life arguments.”

One of the most rewarding fruits of this work is seeing minds changed; that is the whole purpose of going out there and educating the public on abortion. We want people to open their eyes, and minds, and see that precious unborn lives are being intentionally and violently killed. In Alec’s experience, whilst he has not yet seen “pro-abortion” people completely change their minds to oppose abortion from conception, he has seen people reconsider the legal time limits of abortion and those who are willing to look more into the issue.

Some of Alec’s highlights of a display have been when conversations have given him an opportunity to share good news about the value of life, and when people realised they were not well informed on abortion and were open to learn more about it. Many people have not been given the facts and therefore blindly accept the killing of the unborn.

“I think doing the displays works because the images speak for themselves, and many people who are not using social media will get to see the images as well.”

As you can imagine, being on the streets defending the unborn and educating on one of the most controversial topics in our society, is not easy work. Why go out there and risk being rejected and very often mistreated? We asked Alec why he continues doing this challenging work, he responded:

“What keeps me going is knowing that God would be pleased with this type of work. Also, that if just one baby is saved from abortion because of this work, then it needs to be done.”

Have you attended one of our Public Education displays yet? We understand it can be a daunting experience, particularly if you have not done this type of thing before. Here's some advice from Alec:

”To anyone who isn’t sure about getting involved I would say: be a voice for the voiceless. The unborn are the most vulnerable people in the world and taking some time to stand for them or taking a bit of abuse so that a child might have a chance at life is definitely worth it.”

You can get involved where you live, by joining the movement