Why an obscure and mysterious anti abortion billboard in Fulham is really a stroke of genius! 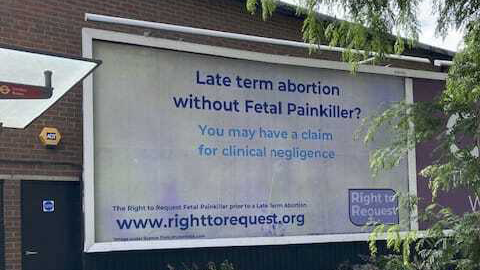 *correction: since this article was published, I have been informed that although Miss Tudor's crowdfunding page has closed, her legal case is in fact ongoing.

Last Tuesday a billboard was erected in Fulham, West London posing the following question upon a lavender background:

“Late term abortion without Fetal Pain Killer? You may have a claim for clinical negligence” with details to the following website.

The website documents a wide array of sources showing the contradictory information currently given by medical authorities on whether fetuses feel pain and what should be done or not done about this question.

What is peculiar is that the website gives no personal information as to who was behind it, except for the email of a female lawyer.

The billboard isn’t causing quite the same splash that the 2019 CBR UK billboard in Walthamstow did, probably due to the absence of the image of an unborn baby, combined with an irate MP. However, far from being the work of a nut job, I believe this billboard is in fact a very pointed attempt to hit the abortion industry where it hurts.

Yes, behind what could easily be mistaken as an advert for essential oils, is I believe, a galant attempt to deal a hammer blow to a deadly industry operating without reference to science, medicine, or the consciences of women. I say so for five reasons.

Over the last 10 years, according to official records, just over 33,000 women have undergone late term abortions in the UK, when the child was 20 weeks old or later. These have been collated in the following table: 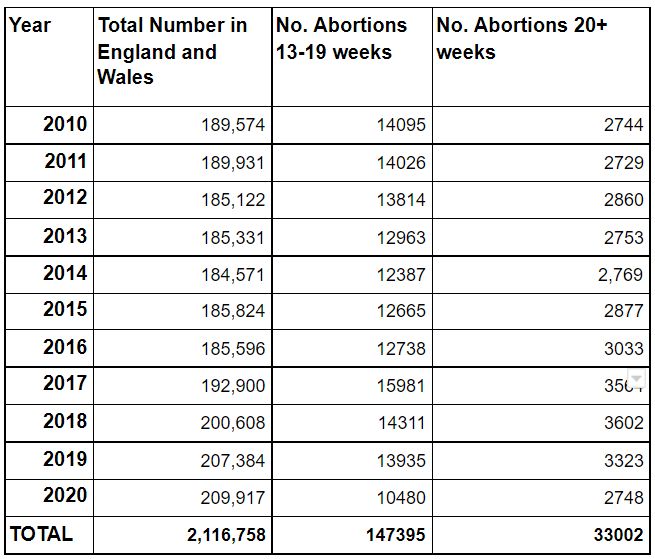 Go back a further decade or two and the number could easily be over 100,000. With this number of potential claims available, this is by no means a niche issue. Women up and down the country have been affected by this and may be eligible for compensation.

According to the latest statistics, there were 2,748 abortions beyond 20 weeks last year.  The majority (61%) of these were conducted using one of two methods.

The first is known as Dilatation and Evacuation in which the doctor uses sharp instruments like these, to dismember, disembowel and crush the child, before the body parts are pulled out one at a time through the cervix. According to a 2007 Channel 4 documentary entitled Abortion - What We Need to Know, an abortionist called Dr Spencer, describes this procedure using his thumb between surgical forceps, detailing the need to crush the “skull then the spine and pelvis” in order to get them through the cervix.

The “gentle” suctioning device, described by one ex abortionist as “10 to 20 times more powerful than your household “vacuum cleaner”,  is used to suck up any flesh, entrails or other debris this process leaves behind.

The second procedure known as “feticide with surgical evacuation” is the same as the first, however three hours or so before the baby is ripped apart and pulled out, it is first injected with a lethal injection directly into the heart or into the umbilical cord. In America this drug is most commonly digoxin, however in the UK potassium chloride is used. According to a 2008 study, it is “injected directly in the left ventricle” and “ induces immediate asystole”. While the same study suggests this is a “safe and effective method of TOP” (Termination of Pregnancy)”, it was followed later the same year by a legal journal article in the states entitled Anesthetizing the Public Conscience: Lethal Injection and Animal Euthanasia in which the author, Professor Ty Alper,  describes the administration of potassium chloride to a conscious person as “excruciating pain that has been likened to the feeling of having one’s veins set on fire.”

This is all very concerning, made more so by the fact that the latest psychological papers suggest unborn children can actually feel pain from 12 weeks onward.

Abortion pills were used to end the lives of the other 1,072 babies that were killed after 20 weeks last year. While less bloody, their fate was not necessarily less painful. Twenty percent (20%) of them (550 babies) were given the same potassium chloride injection described above as “excruciating”. The remaining 522 babies were slowly suffocated to death, either by the effects of the first abortion pill (mifipristone) or died during or after an artifially induced birth using the second abortion pill misoprostol.

And yet, for most of the mothers who have gone through this, most of this information will be entirely new. In many cases not only was their child not administered pain relief before being killed, but the whole nature of what was done to them was cleverly concealed.

When describing a Dilatation and Curetage (D&C)  procedure, Dr Patrica Lohr, the medical director for Bpas, describes it like this:

When describing feticide she simply says it is an “injection through your abdomen to stop the fetal heartbeat”.

A lawyer once told me “courtrooms are where you do conflict, peacefully”. Therefore it is exactly where the non violent seeking justice should target their efforts.

It is no surprise, in the face of the incomplete descriptions detailed above, that one late term abortion survivor named Ana Marie Tudor, attempted to launch a legal bid to force abortion clinics to tell the truth. Unfortunately, her crowdfunding bid was closed last June having only reached 1/10th of its aim*. The exact reason for this is unknown.

I suspect Miss Tudor was outmanned and outgunned by her opposition, and no doubt demoralised by the horrendous comments she received online. Yet her failed bid was not in vain. Whether Miss Tudor realised it or not, she was drawing the battle lines on, what I believe could be the first successful, potential multi million pound, group action against the UK abortion industry.

For years the guidance given on fetal pain has strangely always coincided with the current legal limit for abortion. Even to this very day, despite the huge numbers of parents and staff who have watched premature babies in neonatal units, under 24 weeks, recoil at the insertion of a cannula, the Royal College of Obstetricians and Gynecologists recommendations still hold that pain  “is not possible until after 24 weeks” (p11). If this can be proven to be the blatant lie that it clearly is, not only could it be accompanied by large payouts for over 30,000 late term abortion mothers, but could also see damages paid for the 147,395 women who had abortions beyond 13 weeks in the last 10 years.

5  Huge financial payouts will slow down the killing

Strongly worded letters can be easily ignored, hefty court bills, with the threat of enforcement if not paid, cannot! Stifling the flow of money into the hands of abortionists, cannot but also slow the flow of blood. And this is why I am so excited about this mysterious billboard. Upon the sunken shoulders of Miss Tudor's failed legal bid, comes a second, larger attempt at justice, that should bring her and others hope.

Agreed, a group action, won’t abolish abortion, but it could ensure women are fully informed about what the child will feel if they proceed with the abortion, which no doubt will save some lives. It will also seriously dent the finances of the abortion industry, which can’t be a bad thing.

Correctly managed, the billboard contains an idea with surprisingly high odds of success.